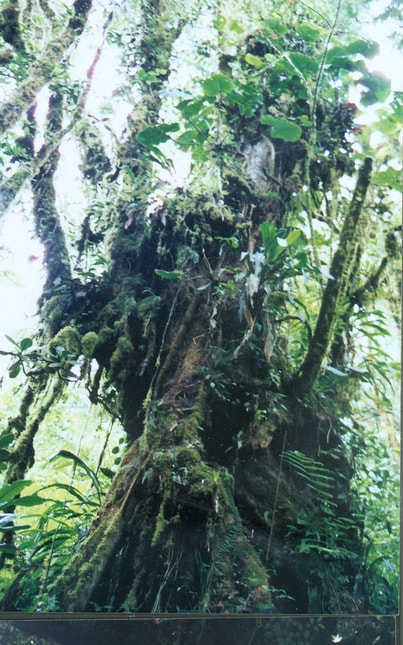 The design aspect of this work is realized through the invention and execution of formative methodologies.  Exercises involving casting, layering and scaffolding transform the aesthetic and structural conventions of traditional architectural mould construction. The formative processes of the strangler fig tree are abstracted and translated, through a series of tectonic exercises to derive unique spatial organizations.  Akin to the strangler’s phenomenological process, the resulting configurations are dependant upon the symbiotic relationship between the found object, or host, and its encasement by the architectural insertion.  Consequently, each work derived is a completely unique transformation of physical and transcendental expression.

The inspiration for this work lies in the strangler fig tree’s phenomenological growth pattern.  The formative processes construct a unique structural cavity carrying an internal imprint of its host.  The sinuous, woody envelope of the tree provides foot and handholds, like the rungs on a ladder ascending from the ancient archetype of the kiva.  While the void is a product of the symbiotic relationship with an existing form and the biological process of spiral phyllotaxis, or the geometric division and declination of plant growth, the resulting spatial construction is not uniform or predictable.  The subsequent palimpsest of geometric layering procures a morphic, seemingly chaotic form, unique at every view.  This unfolding of experience fosters a curiosity of the next event to come and a desire to see what lies beyond the next fold. The ascending experience finally opens into the cloud cover of the upper canopy and open expanse of the seemingly endless forest below. The spatial experience within the tree is ultimately an interactive one, potentially transformative, defined by viewer’s experience and interpretation.

My interests lie in designing the methods for translating this phenomenological occurrence into an architectural language and tectonic, creating an unexpected spatial condition akin to the strangler fig tree.  An immediate architectural parallel one draws when dwarfed by the girth, soaring heights and buttresses of the tree is that of the gothic cathedrals.  Unlike the unattainable transcendental intent inherent in the gothic experience, ascension to the summit of the strangler fig tree is possible and the experience an extremely personal one.  Attempts to replicate the natural experience would be trite and nearly impossible to ascertain.  It is important to recognize that the quality of the experience is the direct result of the process by which the tree is made.

Therefore, this thesis investigates the formative process of the strangler’s growth translated within an existing context to create an architectural design unique to that landscape.  Accordingly, the architecture of the mould is the critical aspect of the design, recording the geometric and structural dimensions of a found object by approximation to create a composition unique in form, material quality and spatial experience. As the framework for the new form is derived from an approximation of an existing element the resulting installation is not an imposition, rather it becomes an integrated, organic insertion.  This space creates a new sense of place within the existing landscape, adding an unexpected  experience.  The flexibility of the work lies in the viewer’s personal determination of what the space is; perhaps it becomes a place for contemplation or frames a movement within the landscape. The layering of space references a layering of experiences, an unfolding of composition that provokes a sense of discovery.  The acts of discovery and determination of spatial usage provides an introspective experience, unique to each person.

Like the strangler fig tree, the spatial outcome of the installation cannot be predicted prior to designing the architectural formwork and formative process. In order to be rigorous about the architectural design of the mould an analysis of the phenomenological growth pattern of the strangler fig tree and its geometric patterning must first be clarified.

The preliminary exercises focus more on the process and the development of architectonic ideas and fabrication methods than on the resulting volumes.  Inherent in each tectonic exploration is the process of encasing the found condition and removing it’s “host” to create an internal cavity within the  new configuration.

Recording by casting anomalies and details of a found object

Casting is traditionally viewed as a liquid methodology that records even the minutest details of a mould.  Originally, the mechanics of liquid casting, particularly bronze casting, appeared to parallel the formative process of the Strangler Fig tree intimately. The inverted processes, a passive falling away of the host or mould, and retention of detail were obvious architectural correlations within liquid casting. However, the strangler tree does not retain the exact replica of its host, rather it is an approximation of the host’s qualities and abnormalities.

The intention in the work shifted from traditional methodologies to the discovery of casting processes that approximated the details of a found object, referencing details without exact duplication.  The introduction of linear elements as a casting material generated a critical change in direction, redefining the thesis. The transformation of materials into forms that convey the connection between nature’s growth and the growth of an idea became the focus of the thesis.

An architectural casting pattern designed to record an original form yet able to be manipulated in symmetry and boundary surface was invented.  Photographic analysis and visual studies of the strangler fig tree revealed mapping strategies and patterning palimpsests to be interpreted for the encasement of a found object.  The layers, or palimpsests, in the sequence form interlocking strata that reference the hierarchies of metamorphic self-repetition.

Spiral phyllotaxis is the dynamic process inherent in all plant growth including the strangler fig tree.  The generation of a growth pattern based on changes from the preceding sequence became an integral part of the design process and technical application in the final installation.  The self-generative rigor inherent in pattern altercations drove the formative process of object encasement, and deviations resulted in arrangements that either ended the patterning abruptly or became very contrived configurations, losing the integrity of the sequential flow.

Experimentation was an integral aspect of the creative process as it allowed the process to be visualized and made tangible ideologically.
​The formative process and the precise rigor of the application of materials generated the form.  Mapping changes of the found object or necessary structural reinforcement controlled pattern configurations and impacted the aesthetics of the final composition. From this process, a formative technology emerged to redirect the pattern, recording anomalies in the object with a very precise logic.

The resulting technique retains an imprint of original information on the interior surface yet its exterior form is distinctly altered from the host.  The relationship between the internal and external languages corresponds so precisely that the form is perfectly unified.  This tectonic tool offers the architect the ability to derive new configurations and pattern languages to describe architectural conditions.